Every year, millions of tulips bloom at Ottawa’s Canadian Tulip Festival, May 11 – 21, celebrating the return of spring, and commemorating Canada’s close ties with the Netherlands. The festival is the largest of its kind in the world. In Commissioners Park alone, over 250,000 tulips of 60 different varieties bloom along one kilometer of flower beds and pathways near the Rideau Canal. 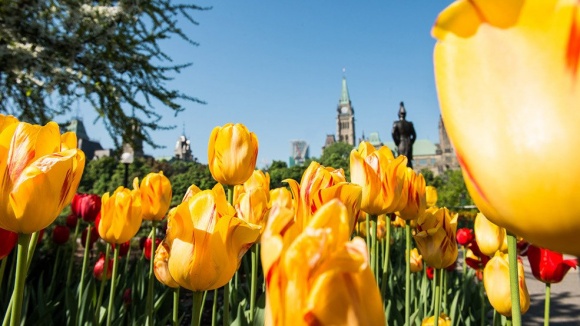 Majors Hill Park, just north of the Fairmont Hotel also has magnificent displays, as does Parliament Hill in front of the Parliament buildings, as well as ByWard Market area, and numerous other locations. In addition, there is pageantry and entertainment for all ages, including breathtaking fireworks and vintage military displays.

Join us for the 55th IMCL Conference on Healthy, 10-Minute Neighborhoods, and enjoy the Tulip Festival at the same time!

Princess Margriet of the Netherlands was born in Ottawa in 1943, when the Dutch Royal Family took refuge in Ottawa during World War II. Canadian troops also played a pivotal role in liberating the Netherlands. At the end of the war, the Royal Family sent a thank-you gift of 100,000 tulips (and continues to send tulips every year, even to this day!). The Canadian Tulip Festival was established in 1953 as a way of celebrating this gift. The tulip was declared the official flower of Ottawa on October 24, 2001.

No comments to show.